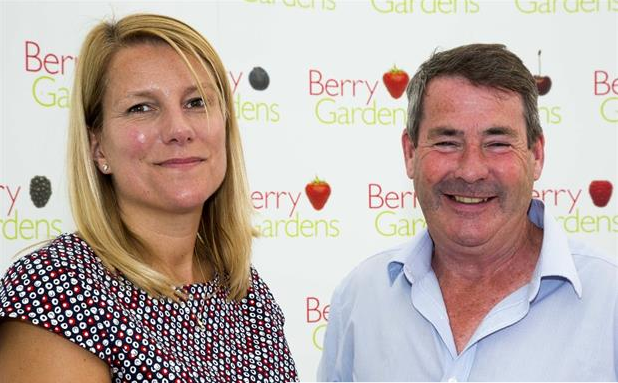 With the latest Kantar Worldpanel data shows a rise of 3.7% in volume, and 7.6% in value, in the soft fruit category over the last year, the UK’s largest grower group said only a lack of labour is stopping it expanding further.

Speaking at Fruit Focus on Wednesday (25 July), Berry Gardens chairman Alastair Brooks said: “Berries are still on an upward growth path that it’s been on throughout my 30 years in the industry. Better quality fruit is driving demand, and people aren’t as fickle as we used to think.”

This is also leading to a greater share of online sales, he added. “Shoppers are confident it will be as good as last week’s.”

The group’s chief executive Jacqui Green said: “Our growers have continued to invest in season extension, both front and back, for which they are putting in biomass boilers, so enabling import substitution. They have also invested in labour saving, through structures and varieties.”

Brooks added on this: “We used to expect pickers to pick 15-80kg per hour. Now it’s more like 50kg – partly because modern varieties have a higher percentage of class-one. So when the government says, ‘make yourselves more productive’, we have done and continue to do so. But if you make a 10% productivity gain, you tend to grow 10% more and hope you can still get the same labour.”

Describing this year’s growing conditions as “turbulent”, he said: “We still see the effect of the ‘Beast from the East’ on raspberries. Growers have coped with the challenges, and indeed the hot weather has helped with demand.”

But labour availability remains “the overriding concern”, he said. “We are 15-20% low, and we have tended to see an exodus in August – that’s the real concern. Unfortunately the government has its hands over its ears, though it has confirmed it will continue to match EU fruit and vegetable funding until 2020, which has given us some certainty.”

Asked about reports of fruit left unpicked on farms due to the labour shortage, Brooks said: “Growers are proud people and don’t want to flash that up. But we have members who have left sizeable amounts of fruit.

“The concerning thing is that source of EU labour is drying up – Romania has less than 10% unemployment. The Home Office and Defra recognise the need, but Number 10 doesn’t see the need just yet. If we are to have a visa scheme, it needs to be in place now, given that the season is starting earlier and earlier.”

He added: “We are a world-class, competitive industry – people come from all over the world to see how we do it – and we have a near-perfect climate for it. We could be even bigger, but labour is the sticking point.”