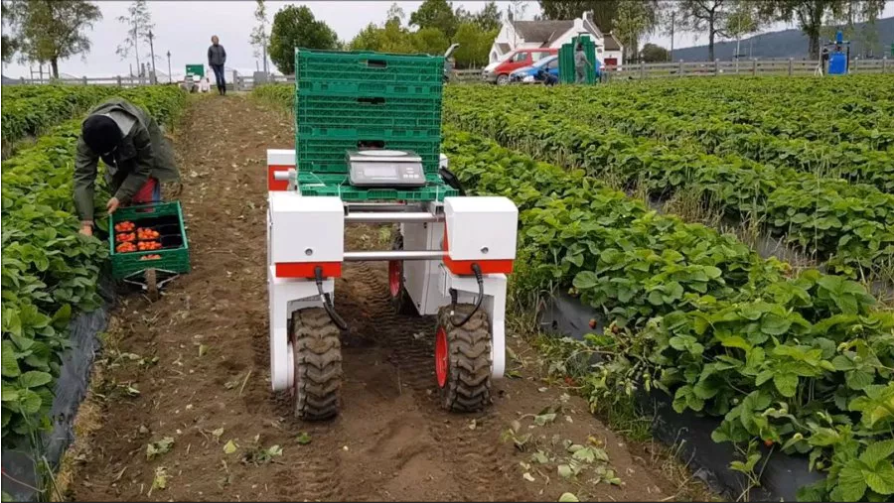 With the soft-fruit industry’s labour crisis deepening, the prospect of commercially available field robots appears to offer at least a partial solution, growers at a discussion at last week’s Fruit Focus heard.

Ed Herbert, co-founder of Hertfordshire-based Dogtooth Technologies, which is developing machines to pick strawberries, raspberries and blackberries, said: “The challenge is to bring any fruit to market efficiently and cost-effectively. At Dogtooth that’s in at the start, so the machines are mechanically very simple.”

Its version of automated strawberry picking will still be semi-controlled, “unlike a wholly uncontrolled self-driving car”, Herbert explained. Dogtooth aims to have machines “working in teams under a human supervisor, but able to navigate autonomously — we hope to make more productive use of the labour we have”, added director Duncan Robertson.

A robot can also determine the mass, grade and any defects of a berry as it picks, he said. “They can give you more high-quality fruit — and if you can pick berries overnight when they are cooler, they will last longer.”

Picking machines can also “build a growth profile of every strawberry on your farm”, Herbert explained, as well as helping with runner-cutting, de-leafing and spraying, “though from a health-and-safety point of view, it helps if no one is in the tunnel”, he added.

“We will be testing a fleet of 24 machines in the field next year, then we can scale up manufacturing in the next three years,” he said. “We will initially offer a picking service, but also move to sales.”

Herefordshire soft-fruit grower Anthony Snell said: “I have seen Dogtooth’s machine in Tasmania. I really like it, but I worry about the message that will come out of this. Technology won’t save us any money. Theresa May will love it. She’ll think, ‘they’re developing it so we don’t need to worry about SAWS’ [a seasonal agricultural worker scheme].”

Session chair Ali Capper added: “We will replace perhaps 15% of the labour requirement for tabletop production in four years’ time,” to which Herbert pointed out: “Not allowing in labour will have a knock-on to other sectors, including ours.”

Other UK developers are also addressing the issue. The University Of Lincoln has just begun a two-year project, RASberry (Robotics & Automation Systems for berry production) with the Norwegian University of Life Sciences, Saga Robotics UK and Berry Gardens Growers, thanks to funding from Innovate UK. Rather than seek complete automation, this will develop autonomous fleets of robots for moving fruit boxes in polytunnels between human pickers and the collection point.

The UK university has been working for some time to develop smart applications mounted on the Thorvald mobile base unit designed by its Norwegian partner. Lincoln’s professor of agri-food technology Simon Pearson says: “These new and augmented technologies have the power to transform productivity within this critical sector of the UK economy.”

Berry Gardens Growers director of research Richard Harnden adds: “Robotic strawberry picking is still some years away, but this associated project will help human pickers by removing the burden of carrying full trays of fruit, making their task substantially easier as well as increasing the amount of time they have available for picking.”

On the continent, meanwhile, Belgian developer Octinion, also working with UK growers, has developed a picking arm mounted on a self-driving trolley that it says is competitive with human picking in price, speed and thoroughness. Rather than snipping the stalk above the berry, as the Dogtooth model does, this uses a pair of cushioned plastic claws to twist off the berry.

In the USA, which also faces a dearth of human pickers, two developers, Agrobot and Harvest Croo, are close to launching automated picking rigs designed for open-field strawberry crops. Relative behemoths compared to the European designs, these span several rows of soil-grown strawberries, though Agrobot’s has also been trialled on tunnel-grown table-top strawberries.

Sounding a note of caution, University of Kent industry engagement manager Simon Barnes pointed out during the Fruit Focus discussion that a report by international professional services firm PwC earlier this year showed the potential for automation in farming “is much lower than other sectors”. He said: “If I were a global robotics company, I might look at those sectors higher up the list.”

But he suggested tech developed for other sectors could also find a role in berry production, noting: “Different crops will suit different forms of automation.” Exoskeletons “can reduce the stress on workers, such as their heartbeat, allowing greater productivity”, while with augmented reality devices such smart glasses, “we can imagine pickers being guided in the tunnel to pick the right fruit”, he said.

Drones could be used for transport and even pruning as well as crop monitoring, he suggested. “[Global logistics firm] UPS says it can use drones to deliver at one-fifth of the cost, though they can’t currently take a heavy payload.”

While “co-bots” are already making inroads in manufacturing, “regulations say they can’t work as fast as humans”, he pointed out. “There is an injury risk of it smacking someone, though it could be programmed to speed up when no one is around.”

The costs element raises another issue, he added. “Now is the time to make the technology and economics stack up. How do you use them for 200-250 days a year, not just 50? You need something flexible — a ‘Swiss Army robot’.”

He also told growers to take a broad view of the term. “‘Robots’ have been assembling cars for decades, but they have no intelligence.” By contrast, at Fruit Focus host NIAB EMR’s demonstration WET Centre, “decisions on managing the crop are made automatically based on sensory data”.