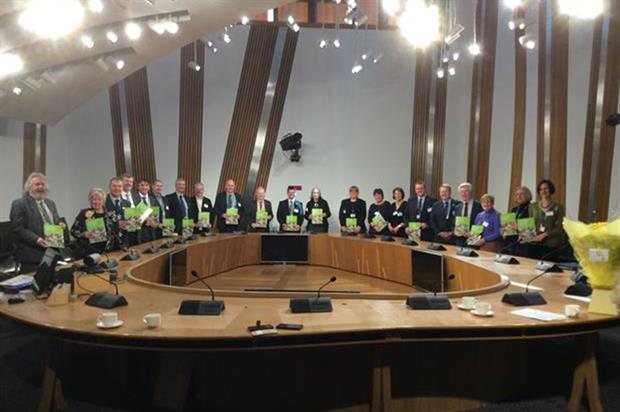 When the HTA’s Scottish Action Plan was published in March, it was hailed as a great success for the HTA’s action group which distilled complex and various industry needs into 10 simple asks to the Scottish Government.

The 20-page plan, produced over a number of years by the 28 member organisations, was delivered to each of the 129 MSPs sitting at Holyrood. It focuses on five key areas where horticulture has a significant role to play — education, health/well-being, environment, economy and tourism.

Now the real hard work starts, with the action group splitting into smaller task groups to, it is hoped, work with the Government on progressing the ideas. According to HTA regional business manager and horticulture panel chair Neil Cummings, there have already been positive noises from Holyrood.

“She is saying she is more than happy to work with the horticulture action group on our 10 asks of Government.
It’s important for us to have a person in the Scottish Parliament who can help us. The problem we’ve had is we’ve had so many different touchpoints, which will have different ministers, different people, different civil servants and teams. Roseanna Cunningham seemed to be saying her team will help us speak to other groups.”

The group was also due to meet with SNP MSPs Annabelle Ewing (Cowdenbeath) and Christine Grahame (Midlothian South, Tweeddale & Lauderdale), the deputy presiding officer at Holyrood, to present the plan to the Scottish Parliament.

The HTA will be leading on the asks that could make an immediate impact in the industry:

The action plan calls for a VAT reduction on all plants, not just those that can be considered food. Cummings says plants in general are “a natural health service” and should all be VAT-free because of the benefits they bring to the environment and the people’s health.

“If we could get Scots to buy more plants and get out gardening, that would have a massive impact on medication and physical health. One small practical change like that could have a knock-on effect.

Similarly, financial incentives for amenity nurseries in Scotland would benefit both businesses and the country as a whole, adds Cummings. The Scottish Government is spending millions on a number of large infrastructure projects, all of which need some aspect of landscaping and planting. But growing in Scotland has declined massively. Because of this, few growers have the capacity to tender for a full contract. This is why the group wants to work with the Government to find ways for Scottish growers to get the work.

One way to do this would be to open up procurement to part tender, as a halfway house situation to enable more Scottish nurseries to get involved in a large procurement project. Another, laid down as an ask in the document, is some kind of online marketplace where Scottish growers can be chosen to fulfil parts of a larger contract.

“There are massive benefits of that,” says Cummings. “Plants are grown in Scotland, which ensures biosecurity. We’re keeping our expertise in horticulture. There are more opportunities for jobs and apprenticeships. Plant health and plant health assurance, these are things that come up time and time again.”

Currently, the Scottish Government is constrained by EU tendering rules, which do not allow protectionism of any single part of the EU when it comes to procurement. But Cummings says there are “ways and means” of writing tenders so they benefit local growers — for example, by specifying plants grown within a certain radius for the purpose of acclimatisation and biosecurity. After Brexit, this will be easier, she adds.

The A9 project between Perth and Inverness is a good example of a very long-term project where there is enough time for Scottish growers to grow from seed, if industry and Government work closer together, she maintains.

The Queens Great Crossing is another. “There is an opportunity to work with growers over a long period of time so they are able to facilitate what’s required of them with Government. That’s where the action plan will come in. The Irish Government offers interest-free loans for business development and tax relief. That’s where we think we should start.”

More growing means that more young people will need to choose horticulture as a career, so the group has a long-term vision for integrating horticulture into the consciousness and lives of generations to come. They believe that education is the bedrock of a strong future for Scottish horticulture.

“We felt that the first thing to do is get the Scottish Government to get all children to become more interested. It should be part of STEM [science, technology, engineering and mathematics] education. That’s happening but it isn’t standard practice. There’s that knock-on effect — more children interested in where their food comes from. We are keen to provide mentors, ambassadors and teaching packs. We think that is the way to state this to get Government to understand how important that could be.”